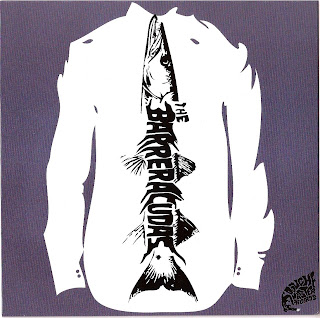 You know, we just watched that Heart – Barracuda video and it reminded us that we haven’t said anything about our buddies down in Atlanta, The Barreracudas. So now, here we are, talking about our buddies down in Atlanta, The Barreracudas. First off, we’d just like to ask: what are they putting in the water in Atlanta? Seriously, could this city provide any more awesome bands right now? The babes rock and roll, but the more we think about it, the more we realize that words won’t do this band justice. Because, I mean, it’s hard to talk about a band that sings songs about eating dog food and not make them sound like dummies. They put out a 7″ on Douchemaster this past spring and have since developed a deservedly strong fanbase in the area. Not only that, but they’ve been playing with some of our other fave babes lately [Nerve City, Trashcans, Coconut Coolouts, Personal & the Pizzas, etc.]

There’s a little video for you of them playing “NY Honeys” from their first show ever. That was a Bobby Ubangi Benefit show with Deerhunter and Black Lips. Not a bad bill for you first show as a band, right?